The past few years for Valentine's Day, I led a group run that spells out something related to that over-commercialized event.  The first year it was "LOVE", the following it was also "LOVE" but packed into a neat little square, in the style of that famous Robert Indiana sculpture.  Last year, it was "I {heart} U", where the heart symbol was where the {heart} is.  A Facebook memory reminded me, belatedly, that this year it should be "xoxo".  I said "belatedly" because I totally forgot about it and already designed the route to spell "amore", the Italian word for love.  It could have been the Spanish word "amor" but because of that Dean Martin song I went with "amore".  The little pun about "a moray" (eel) and "amore" is one of my favorites, so "amore" it is.

The route makes no use of any special skill with pausing and unpausing of GPS watch or smartphone app.  I am tempted to throw in one, though, to make the top of the "r" better show the arch at the top of that letter.  It'll be an optional thing.  If you don't do it, the letter still looks like an "r".

We'll walk to the green dot on the "a", without activating watch or smartphone app, then start from there.  Event is open to the public, so do come if you are in the neighborhood.  I'll be on the traffic circle of Bartel-Pritchard a little before 9:30. 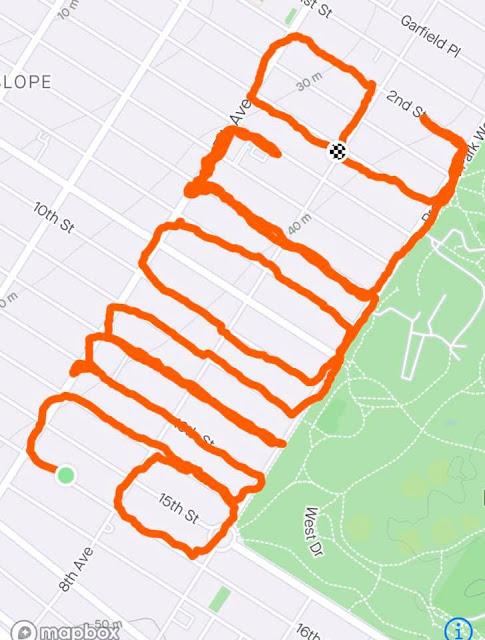 On Sunday December 22 of this year, 9:30 A.M., I will be at Grand Army Plaza in Brooklyn, corner of Union Street and Prospect Park West (PPW), to lead a run that draws a menorah.  I did a test run today, but I was not in the right frame of mind to do the entire menorah, just the left-half, or what I call a semi-norah.  As in semicircle.

The design called for about 8 miles, today's run came out to about 4 miles, so that's about right.  The original 8 miles didn't include a base, so I added it today but it still looks not wide enough.

For the official run, I re-designed the route to have narrower distances between the branches, shorter stem, and wide stem, all resulting in the shorter distance of six miles.

Lastly, check out the video made via Relive.cc.  Because of some disagreement between Relive.cc and Strava, I had to use Runkeeper, which weirdly didn't show the run to Relive.cc.  I had to log into Runkeeper on a computer and export the route to GPX then import that into Relive.cc, again on a computer.

The run is made for the Prospect Park Track Club but as with most, if not all, PPTC events, the run is open to the public.  If route art is your interest, come join me on Sunday Dec 22 at 9:30 A.M., Union Street and PPW. 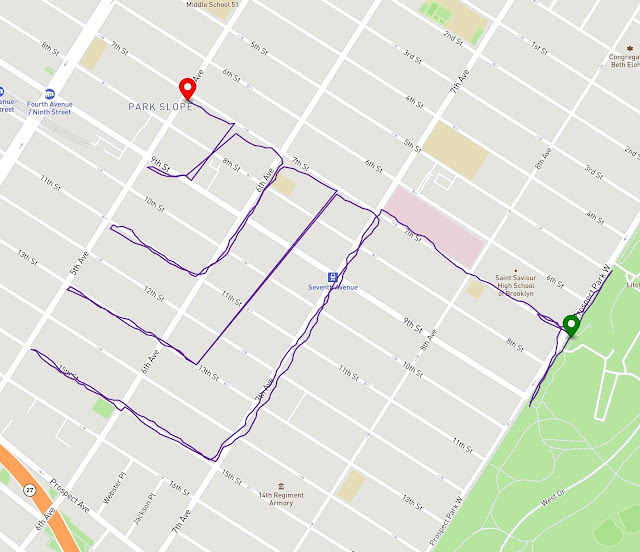 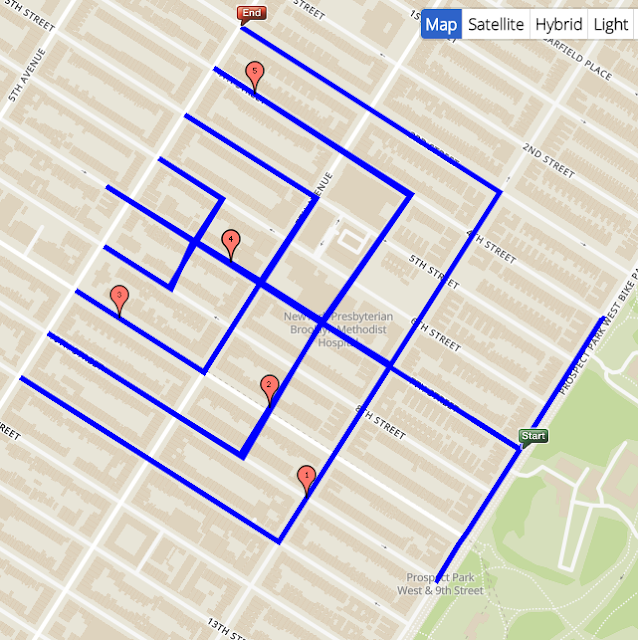 Posted by Qaptain Qwerty at 6:28 PM No comments: Links to this post
Email ThisBlogThis!Share to TwitterShare to FacebookShare to Pinterest
Labels: menorah, Relive.cc, route art, Runkeeper

This past Veterans Day I had to go to work.  I usually do, the places I worked at don't observe the holiday so it's not that different this year.  What is slightly different is that as we had a meeting in a big conference room, someone asked if anyone present is a veteran.  There were some and we thanked them for their service to the nation.  I wanted to crack a joke but all I could come up was that I was a veteran of the Battle of the Sexes.  Not even a veteran of some war, lame.  Only days later that I came up with the following "Wars" to jokingly claim to be a veteran of:


What other not-so-serious Wars can be included?

Posted by Qaptain Qwerty at 3:25 PM No comments: Links to this post
Email ThisBlogThis!Share to TwitterShare to FacebookShare to Pinterest
Labels: Veteran's Day, war

Part of my job the past few years involves opening boxes containing new computer equipment.  The pieces often come with cables that are held together with twist ties.  Said twist ties are thrown away by most, if not all, of my colleagues.  I am sure most people do that too.  I just cannot stand seeing something perfectly re-usable being thrown away.  Most of the time I save them but then I don't use them fast enough.  What to do with all these twist ties?  I try to find uses for them and just yesterday found an innovative way to.

I had a need to find out, among the many cables going down a grommet hole, if a particular cable goes to a particular computer.  The area where the cables go through is dark and tight.  Some of the cables are tightened with zip ties such that they cannot be pulled much.  I hate zip ties!  In my last job, I know a guy who tried to cut a zip tie with a knife and ended up putting a big gash on his forearm.  Zip ties should be banned!  Anyway, back to my cabling woe.  So I couldn't tug on the cable I was working with to see where it goes.  And it's dark back behind the desk.  I happened to have a twist tie attached to my ID lanyard.  I wrapped the twist tie around the cable and slowly push it down the grommet hole, along the suspect cable, until I was able to catch it.  Voila!  It indeed connected to the computer I suspected it would.

Posted by Qaptain Qwerty at 10:24 PM No comments: Links to this post
Email ThisBlogThis!Share to TwitterShare to FacebookShare to Pinterest
Labels: twist tie, zip tie

I share administration responsibilities for a Buy Nothing group on Facebook but occasionally I still check in with the two Yahoo! Freecycle groups I belong to.  Big news!  Yahoo! is essentially ending support for Yahoo!Groups!!!

Below is the info from the Freecycle New York City, which covers all five boroughs of NYC.  I haven't checked out Trash Nothing but Yahoo!Groups I know is so clunky by 2019 standard.  It is about time.  So long Yahoo!Groups...

We're happy to announce that New York City Freecycle is moving to the trashnothing.com site.Sign up now at:https://trashnothing.com/freecyclenewyorkcityThe new site makes freecycling quicker and easier with:- group posts categorized & color coded by type (Offer, Want, ..)- automatic removal of offers that are taken & wants that are received- instant email alerts for items you're interested in- all your group posts in one place- it works great on phones & tablets- simple photo galleries, spam protection & more!See all the features at: https://trashnothing.com/freecyclenewyorkcity
Posted by Qaptain Qwerty at 10:04 PM No comments: Links to this post
Email ThisBlogThis!Share to TwitterShare to FacebookShare to Pinterest
Labels: freecycle, Trash Nothing, Yahoo!

A pun may not be funny if it has to be explained but I'll take the chance so you may appreciate the punchline in the previous post. 谢谢你的爱 is the title of a popular song by Hong Kong superstar Andy Lau.  It means Thank You for Your Love.  In pinyin (the romanization of Chinese characters to make it easier for non-native people to read Chinese) the phrase is xie xie ni de ai.  I readily associated the last three words as near the eye.  Then at some point I thought of the catchphrase See Spot run from a series of children's book.  So I got See + something that sounds like xie + near the eye, but what can that something be?  President Xi of China was a good match, although I mean no offense to not refer to him as President.  I could have drawn a cartoonish version of him, as opposed to the stick figure, but I want to avoid any misunderstood bad portrait of him.  At one time, I thought of using the nickname of an old nurse in the news, See See, but given all the news about U.S.-China relations these days, President Xi makes more sense.  Originally I was going to draw the Statue of Liberty, with different views of it as the helicopter buzzes about.  It would be a lot of work.  Luckily, a recent visit to the Statue got me a few photos that I was able to use as the backdrop edited in Gimp (the free alternative to Photoshop and its annoying subscription model).

So there you have, a pun in two languages, a bit convoluted, but it's definitely original.  That's my style, I try to come up with original content.
Posted by Qaptain Qwerty at 9:38 PM No comments: Links to this post
Email ThisBlogThis!Share to TwitterShare to FacebookShare to Pinterest
Labels: Andy Lau, pun, Statue of Liberty, Thank You for Your Love, Xi Jinping, xie xie ni de ai

THANK YOU FOR YOUR LOVE

Posted by Qaptain Qwerty at 3:58 PM No comments: Links to this post
Email ThisBlogThis!Share to TwitterShare to FacebookShare to Pinterest
Labels: Andy Lau, Statue of Liberty, Thank You for Your Love, Xi Jinping
Older Posts Home
Subscribe to: Posts (Atom)